Now that its summertime, it’s time to stay hydrated and nourished with energy that’s long lasting 🙂

Playtime in the hot summer sun involves a need for proper hydration and minerals, and food of course as your energy source!

This past weekend I jumped back in the boots of the wake board with long lasting energy for the entire day in the salt and sun!

What did I fuel my body with?

I find there to be a heavy importance to fueling the body with foods that maintain blood sugar balance, especially when there’s high level of activity involved 🙂 Consuming low glycemic fruits prevents blood sugar crashes, assisting in proper hormonal communication, preventing energy storage to turn into fat, while providing your body with energy that will push you through your low or high intensity activity!

I’ve been been highly involved in water sports for my entire life, and I can honestly say that there’s nothing that compares to fresh produce to fuel me fully while playing in the sun 🙂

I find celery to be an important smoothie ingredient due to its mineral content. There have been several comparisons in veggies to body parts.

What is so special about celery?

Of its available nutrition, Vitamin K is its shining star 🙂 Fascinatingly, celery is very similar in shape to the long bones of the human body. Its shape highly resembles the humerus of the arm, the radius & ulna of the forearm, along with the femur, tibia, and fibula of the legs. Not to mention all of the short & thin bones of the hands and feet! Celery isn’t the only vegetable that highly resembles human anatomy 😉

In the past decade it has become evident that vitamin K has a significant role to play in human health that is beyond its well-established function in blood clotting. There is a consistent line of evidence in human epidemiologic and intervention studies that clearly demonstrates that vitamin K can improve bone health. The human intervention studies have demonstrated that vitamin K can not only increase bone mineral density in osteoporotic people but also actually reduce fracture rates. Further, there is evidence in human intervention studies that vitamins K and D, a classic in bone metabolism, works synergistically on bone density. Most of these studies employed vitamin K(2) at rather high doses, a fact that has been criticized as a shortcoming of these studies. However, there is emerging evidence in human intervention studies that vitamin K(1) at a much lower dose may also benefit bone health, in particular when coadministered with vitamin D. Several mechanisms are suggested by which vitamin K can modulate bone metabolism. Besides the gamma-carboxylation of osteocalcin, a protein believed to be involved in bone mineralization, there is increasing evidence that vitamin K also positively affects calcium balance, a key mineral in bone metabolism. The Institute of Medicine recently has increased the dietary reference intakes of vitamin K to 90 microg/d for females and 120 microg/d for males, which is an increase of approximately 50% from previous recommendations.

Vitamin K supports the health of the bone as it also looks like it, anatomically!

This smoothie is fully loaded and ready to fuel a body that’s ready to perform with energy, strengthen bones, and even cleanse at the same time 🙂

I love to advocate smoothies versus juicing for the great purpose of blood sugar sustainability.

What do I mean by this?

High fiber foods have been greatly shown to highly impact the blood sugar by maintaining it and keeping it low and regulated.

It would be very conflicting for the body to not only break down but also disperse energy (from the food) at different rates into the blood stream. The  more you’re able to pair low glycemic foods together, the happier your body and overall digestion will be 🙂

Another great factor of green smoothie making is how it aids in digestion. In addition to high fiber content, consuming fresh greens supports your digestion through the natural state of probiotics that are actually living on your produce, microscopically!

For those of you that love to play in the summer and are looking for some real liquid courage, here it is!

Peel your cucumber and chop into medium pieces. Peel the skin from your pear, or make sure that you have thoroughly cleaned its skin from any potential residues on its surface. Remove the stem and core of your pear, & dice into quarters. 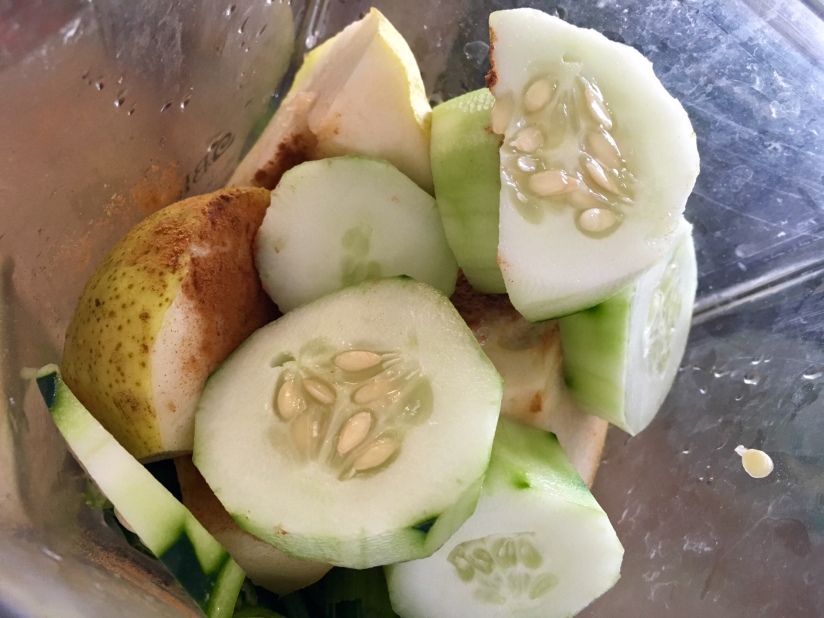 Rinse cilantro, celery, and spinach in purified water before placing into blender. For greater nutritional hydration, soak these items for a brief 20 minutes before blending.

Consuming hydrated produce is always beneficial and assists with hydrating the cells.

Toss all prepped produce into blender with 8oz of purified water and 1/2 Tsp of cinnamon and Turmeric.

Once blended, then pour in chia seeds. Blend on medium for about 30 seconds to make sure they’re evenly blended throughout.

You can either pre-soak your chias before adding them to your smoothie, or let them soak in your smoothie for a few minutes.

Top your smoothie off with bee pollen, or blend it in with your chias!

Your smoothie should turn out pretty creamy in texture, going down the shoot with a slightly sweet and smooth taste.

In addition to the amazing nutritional benefits of these veggies, using turmeric and cinnamon are another key essential element in this smoothie. As mentioned before, I am a huge fan of Turmeric and Vietnamese cinnamon!

These two powerhouses are both anti-microbial and are incredible pathogen fighters! I love to use these two since they are both incredible accommodating to most foods and pallets 🙂

I’m currently on day 7 of this green smoothie drinking. On day 1, I had no intention of stretching this out for periodic days. However, my body is feeling so clear, energetic, and grounded, that I have no urgency to stop 🙂 Also, I am experiencing great levels of deep sleep, magnifying my dream state!

Get on board with this delicious creamy & dreamy green smoothie!

For more information regarding filtered water and the system I’ve been using for the past year for drinking, food prepping, and cooking,  find out more here!

View all posts by WhollyHumanz