I fell in love with granola and scones growing up on the peninsula in Long Beach with my dad over the water.

He lives on a boat in the marina, which is one of the greatest gifts in my life I could ever ask for, and is most certainly the reason why I love the ocean so much!

On the weekend mornings I spent with him, he’d always bring my favorite breakfast from the local coffee shop at the end of 62nd st. They carried freshly baked berry filled scones from the Sconage Bakery, called the “Tri-berry scone.” These delicious scones were about the size of your hand with your fingers stretched out, their insides filled with fresh warm berries, and they blasted your senses with sweet heaven. TO LIVE FOR!

Eating those scones over the water on a beautiful peninsula morning was instant bliss! They were also great fuel for a day of jumping off the boat docks and swimming through the marina all day from morning sun, until sun down 🙂

In time, I’ll put their scones through the HealthyHumanz kitchen lab process 😉 For now, let’s hit up the gRAWnola!

I seem to be in this mode of recreating childhood favorite foods that I associate with comfort 🙂 I firmly believe that enhancing your health and eating healthier food options can still be full with comfort, experimentation, and satisfaction!

What’s not to love about granola’s crunch, sweetness, & subtle saltiness? It’s delicious on its own, in a bowl of cereal, and topped over an acai bowl!

The unfortunate fact about purchasing granola? Most recipes contain processed oil…If you’ve been following my posts, by now you’ll be fully aware that I’m not a fan of the stuff, at all.

I reached that point to where I was craving this childhood fav, & feeling inspired by other bloggers like The Sweet Simple Vegan! Jumping into the saddle of creating a tasty crunch without oil sounded like a FAB idea! I couldn’t resist 🙂

Like many of the other recipes I’ve posted, there’s reason for the specific ingredients I use like Vietnamese cinnamon, versus just plain cinnamon. Also, the same goes for raw unheated honey!

My goal is to turn all foods into fuel that has the ability to heal the body.

Yes, the reason there is NO oil in this recipe is due to the fact and research that show the toxicity of processed oil to the body, directly interfering with supporting and nourishing the body nutritionally. Remember, the best foods to consume are whole foods, in their full format where they have the minerals, vitamins, antioxidants, and enzymes to help transport, break down, and enhance absorption rates! So, including an oil in this recipe would not be of service to the body, nor would it make it taste any better!

Using herbs and spices helps amplify the healing ability of the foods we consume. They offer large amounts of antimicrobial characteristics, and complex physiological support that enhance the body’s ability to use their qualities for infection fighting! Cool, right?

When we come from a conventional way of eating, we don’t really look at herbs and spices in this manner. From my own experience, I used to look at them as if they were just “there” to be used.

Why the use of Vietnamese cinnamon?

Vietnamese cinnamon is known to be an incredible blood sugar support by preventing insulin spiking and crashing with the consumption of high carbohydrate foods. This powerful spice is known for its anti-blood clotting abilities, anti-microbial activity, blood sugar control, increasing brain function, cardiovascular protection, and has beyond powerful food preservative abilities.

We definitely don’t want to be consuming any of that 😉

Cinnamon’s antimicrobial properties are so effective that recent research demonstrates this spice can be used as an alternative to traditional food preservatives. In a study, published in the August 2003 issue of the International Journal of Food Microbiology, the addition of just a few drops of cinnamon essential oil to 100 ml (approximately 3 ounces) of carrot broth, which was then refrigerated, inhibited the growth of the foodborne pathogenic Bacillus cereus for at least 60 days. When the broth was refrigerated without the addition of cinnamon oil, the pathogenic B. cereus flourished despite the cold temperature. In addition, researchers noted that the addition of cinnamon not only acted as an effective preservative but improved the flavor of the broth.

Why raw UNHEATED honey, instead of the cute little honey bear?

The manufacturing industry has its many ways of getting around terminology and legalities in order to save in cost and speed up production. If raw honey does not use the term “unheated” on the label, this means that the honey is not truly raw! Meaning, that it has been exposed to heated temperatures that destroy enzymes, vitamins, minerals, yeasts, and antimicrobial qualities of this amazing healing food.

A lot of honey found in the supermarket is not raw honey but “commercial” regular honey, some of which has been pasteurized (heated at 70 degrees Celsius or more, followed by rapid cooling) for easy filtering and bottling so that it looks cleaner and smoother, more appealing on the shelf, and easier to handle and package.

In reality, the “dirtier” the honey, the healthier!

Your body greatly benefits from raw honey as it alkalizes through the digestive system into the gut, without undergoing any fermentation within the gut.

Before mixing ingredients for granola, It’s important to soak, drain, and rinse  your raisins PRIOR to mixing them in the wet granola mix.

Let them soak for 30 mins to an hour, drain, rinse, then set aside for later mixing.

With a wooden mixing spoon, mix dry ingredients so cinnamon, salt, and chia are evenly distributed before adding wet ingredients.

Using your mixing spoon, mix thoroughly so all ingredients are dispersed evenly, and oats are wet from the apple sauce. 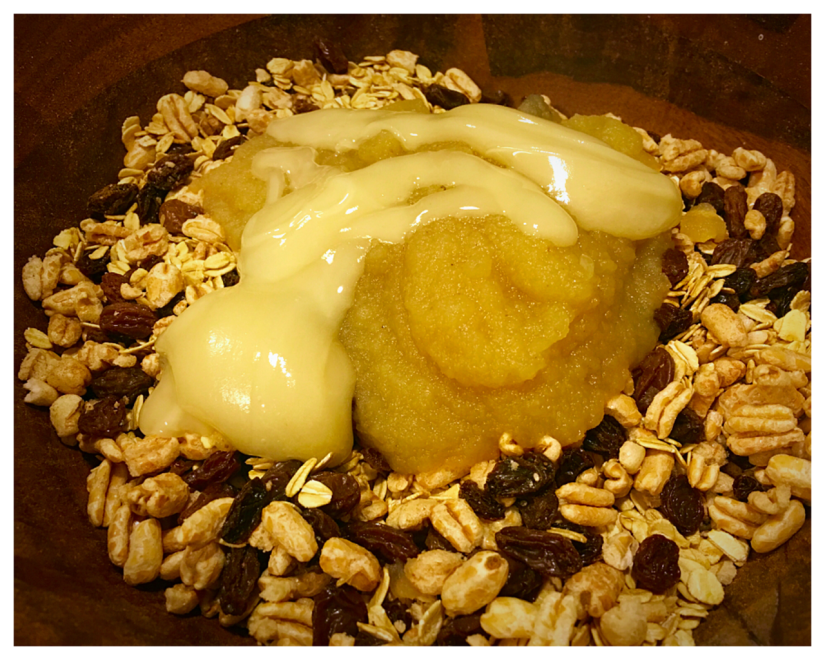 If you have a dehydrator that has mesh and flat trays, you’ll want to make sure to use your flat trays for laying out your soon to be granola 🙂

Lay your granola mixture out so that it’s no thicker than 3/4 inch for complete dryness and definite crunch.

Granola is usually done after 8 hours 🙂

To assure complete dehydration and crispiness, I like to take a nice chunk out of the dehydrator to cool for a minute or so.

After cooling, take a bite to test it out. As your taste testing, you’ll want to test the texture for any moisture. Remember, when storing foods like these, any moisture just leads to mold!

We don’t want any of that 🙂

Once your granola is done dehydrating, allow to cool for 5-10 minutes. Then, you can break your granola into chunks and small pieces!

Now, they’re ready to jar and enjoy as a snack any time you wish! Love to enjoy as a delicious bowl of cereal in oat milk!

These delicious crunchy bites are perfect when you’ve got that sweet tooth in motion, they’re a fantastic alternative to sugary cereals for kids! Leave the fake colors, artificial sweeteners, white flour, and fortified cereals on the grocery shelf to expire!

For a lovely bowl of plant based cereal and milk, here’s my dairy free milk alternative!

If you love acai bowls, gRAWnola is a delicious complimentary crunch!

You’re quality of life is worth it, I promise!

View all posts by WhollyHumanz